For some, it’s about ambiance, for others, it’s about the latest trends, for the Naked Finn, their success is based on neither. While their location in Singapore is no hole (by any means), their success as one of the greatest restaurants on the entire island is based simply on their use of quality seafood that’s cooked simply and priced well. It’s an island situated right below Malaysia, just above the Singapore Strait. There’s no question as to why their seafood is of the highest quality, when you consider that a fresh variety surrounds them.

The menu boasts a thorough list of lunch options that are reasonably priced to be cheaper than the dinner options (as most restaurants are): Northern Prawn (wild-caught giant red shrimp) highlight the menu as the latest addition to their famous stock that you can find in their famous noodle soup. Additionally, pork belly, barramundi fillet, fish soup, lobster roll and salmon salad are amongst the favorites on the lunch menu.

Unlike other restaurants with more complicated menus, dinner is served in sets at the Naked Finn: sets of two, and sets of four, with the options to purchase specials, meats, sides, desserts and wines outside of that set.

Desserts are equally as fresh, using fruits and ingredients of the surrounding regions such as coconut, grapefruit, and Melaka. Coconut sorbet, bubur pulut hitam, lychee with grapefruit and acacia honey sorbet and gula Melaka sorbet with sea salt are among the favorites.

The wine list isn’t clogged with cheap, common wines. Rather you’ll find an extensive, yet precise list of the best quality and most reasonably priced choices from all around the globe.

A quick search online reveals that the Naked Finn has been tried and remains true to be one of the most praised restaurants in Singapore, even the surrounding area.

Last year, The Sunday Times named their Lobster Roll as the Best of 2014 (in all the world), and said, “Like everything else at this seafood shack, it is well thought out and perfectly executed.” Food critic Florence Fong piggybacked on the comment, stating that the Lobster Roll is a superb value – the best hot lobster roll for under 30 dollars that you’ll ever eat.

The well read Conde Nast Traveller listed it as number six on the Singapore’s 50 Best Meals article found in the India edition.Dozens of other magazines, blogs, critics, chefs and restaurants have had nothing but positive things to say in regards to the restaurant.

Needless to say, if you find yourself in Singapore, look no further than the Naked Finn for a meal that’s fresh, simple, and reasonably priced.

Have you visited the Naked Finn? 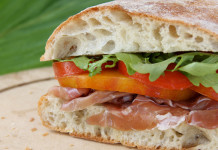 Dare We Say: The Best Sandwich Shop In Toronto?